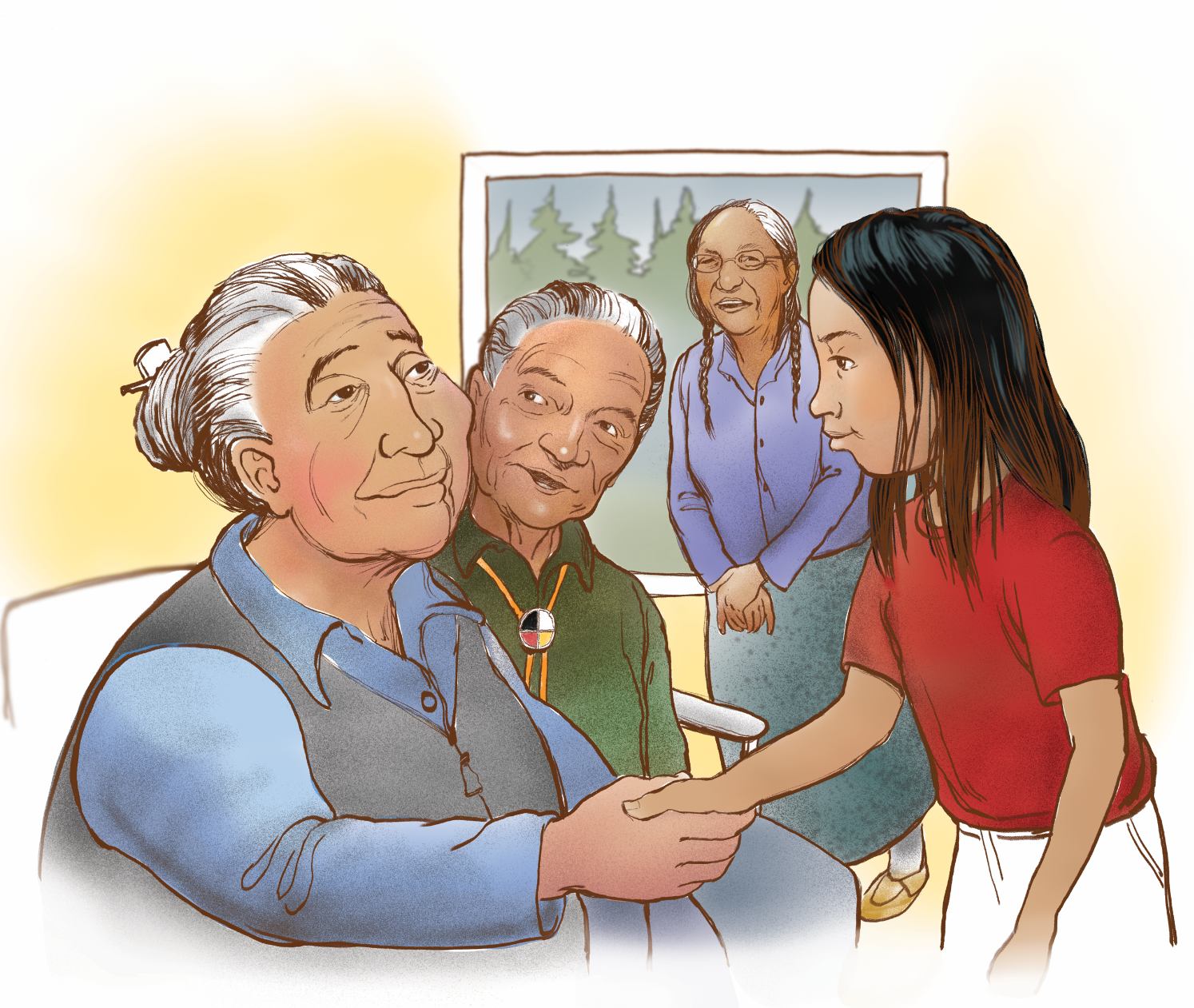 The illustration process incorporates more than just drawing something. When it comes to sequential art and storytelling, a collaboration exists between the creative minds who try to visualize and then bring to life the same expression, emotion, history, mood, and environment to the imagination of the reader. MFNERC develops educational resources in-house, which means we have several staff who contribute their artistic skills to illustrating various resources such as language readers, colouring books, historical books, children’s cultural literature, and posters.

Don Monkman, Content Manager/Graphic Designer for Wapaskwa Virtual Collegiate, is one of the talented artists who illustrate some of our resources. Don grew up with comics and always knew he wanted to draw. Don spent three years earning a degree at Sheridan College where he learned illustration. Now Don influences other children with his art, children who are reading these stories about the history of the treaties and stories centred around their cultures and languages.

What is the process of illustration? What goes into creating artwork for a story? Don shared his perspective: “Illustrating someone else’s work is really about getting into the mind of the writer. It’s about figuring out what they want to see on the page and taking that vision and using your style of art to reflect that onto a page. It’s helpful if you can speak with the writer and read the story as many times as you can, so you can really get a feel for their story.

“As an illustrator, you can capture the emotions of the story and realize the writers’ vision for their story. The words can be so powerful in creating images in people’s minds, and you don’t want to destroy that. Illustrations can really make or break a story that way, and they can almost wreck a good book, so you need to respect the writer in what they’re trying to communicate, and you don’t want to put your own perspective on that or change it in any way. The idea is to create something that reflects what they’re saying but taking it to the next level. Your job is to expand on what they’ve said and take the reader somewhere where maybe their imagination hasn’t taken them yet. You’re just opening that door a little bit by showing that image, expanding on the imagination of the reader.

“That’s the difference between illustrations for stories and illustration for art; you’re not often starting from ground zero like you would if you were starting an art piece with your own concept, you’re starting with the writer’s concept and what they’re trying to communicate. So, you’re trying to get into their mind a bit and capture their story and their audience’s imagination.”

Not all illustration jobs are just about telling a story. There are books meant to be informational, somewhat technical, or historical. If a story took place a long time ago, there is research needed to reference the clothing of characters, or even the likeness of real people in history. With the creative stories, there is more work around sketching and relying on your creativity to fill out the scene. There’s always a combination of being creative but also historically accurate.

Many illustrators use programs such as Photoshop and Illustrator, but they also use other methods. Art comes in many forms; all are valid forms of illustration. We have some done in photography, digital, pencil crayon, ink, and watercolour. For one of our books, the illustrator used construction paper cut-outs to create intricate and detailed sceneries. When Don worked on the series Treaty Tales, he used larger pieces of paper and then he drew the images onto a translucent paper. He drew individual parts of the scenery onto different pieces of translucent paper and moved them into place so he could scan it to the computer. Once Don uploaded the image to his desktop, he traced over the image to create the black outlines with Photoshop and his Wacom tablet. From there, he sent it over to Amber Green, who works in Publishing and Communications, and she coloured it in using Photoshop.

Check out some of Don Monkman’s illustrations in our Shop:

Treaty Tales: The Handshake and the Pipe