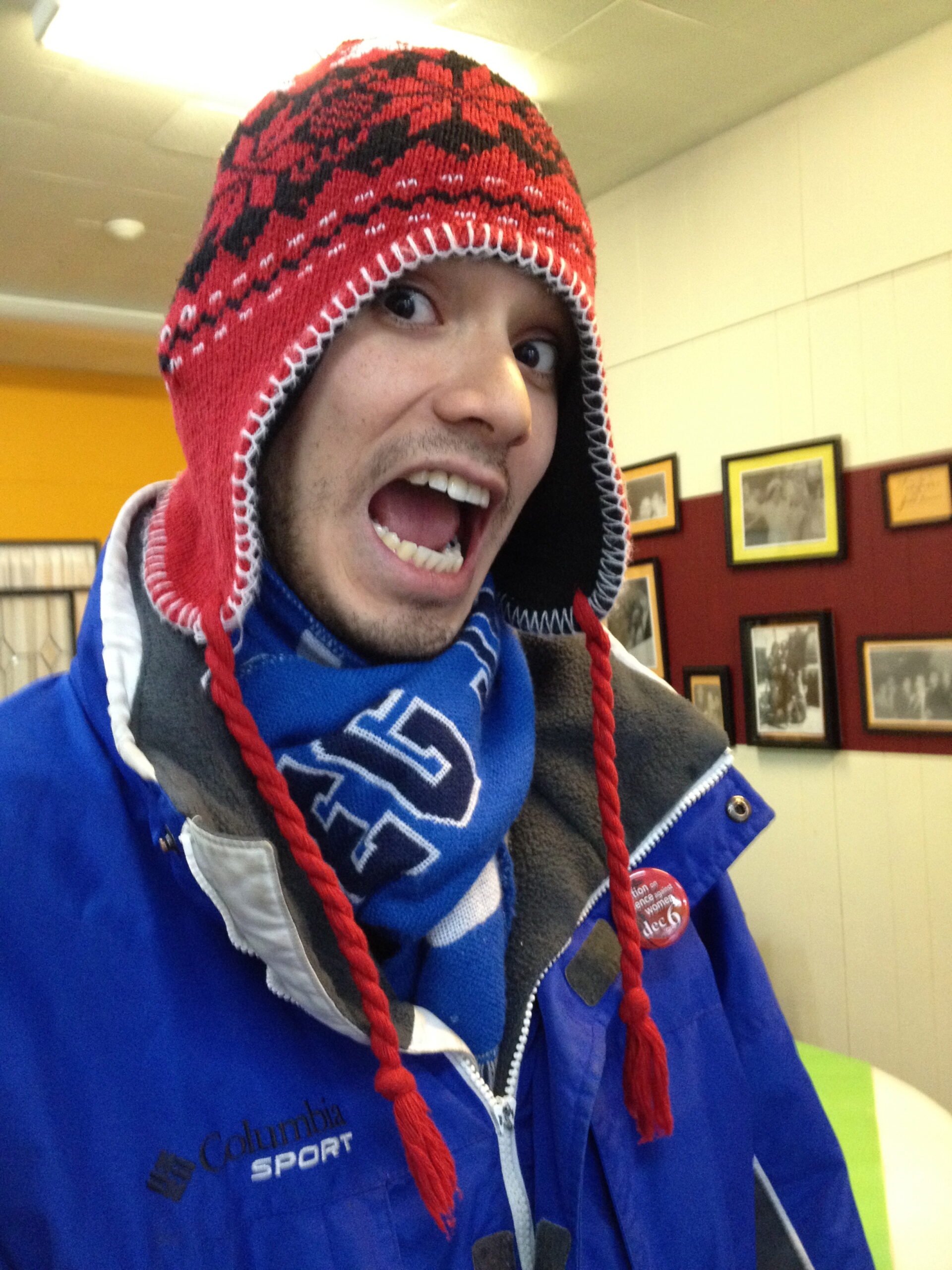 I wanted to kick off MFNERC’s official blog with a bang. And what better way than by chatting with a local hero about First Nations education. If you’ve never heard the name Michael Champagne, otherwise known as the Northend MC, chances are it won’t be long until you do. A basic descriptor for Michael would probably sound something like, “young, successful, Cree activist/volunteer/entrepreneur with the goal of helping Aboriginal young people.”

But once you meet Michael, you realize pretty quickly that such a descriptor doesn’t nearly cover it. He speaks with a passion from the very depths of his spirit, especially when talking about teaching resilience to Aboriginal young people, suicide prevention, education, learning, and ceremony. There is a fire lit in him that is immediately obvious. He is intelligent, well spoken and, in his words, loud and obnoxious. But he doesn’t just talk, he backs up everything he says with actions: he founded and helps run Aboriginal Youth Opportunities, he speaks regularly to groups all over the province, he attends rallies, he mentors young people, and he’s willing to be interviewed by a complete stranger about an issue that is near and dear to his heart – education (plus share why he paints one of his fingernails black, and what he’s recently been learning from watching Russell Brand videos).

What follows is part one of an interview the MC and I had back in December. Part two will be our next blog post.

Kim Kakegamic (interviewer): Is there a particular teacher you remember who inspired you?

MC: Yes! Mary Joe Holmes. She was my grade 4 teacher. She showed me how an educator can help build resilience inside of a kid when they haven’t had the social relationships they need to be accepted by their peers. I never expected to have my confidence built up like that. The story I like to share is how she gifted me with a book. It was a book in a series that I loved, that I couldn’t afford. She noticed, and that gift was a way of saying, ‘I notice you, I see you’re trying, keep it up.’ It’s such a simple thing, that kind of acknowledgement.

There’s something really cool that happens to kids when an adult or a person that they respect demonstrates through their actions that they believe in them. So if I can be a cool adult and tell a kid “good job, keep it up,” like Ms. Holmes did for me, I’m gonna do it everyday, twice a day, five times a day, five kids a day, five places a day because it’s life saving!

KK: Tell me a bit about your work with Aboriginal Youth Opportunities.

MC: Well, it started as a one-time event. I was stepping out of a role I held at Ndinawe Youth Resource Centre, but I wanted to let the youth there know that our relationships were still important to me, that they were valuable. So I booked Thunderbird House, put up posters, posted on facebook, sent emails, invited kids face-to-face and I called the event “Michael Champagne presents AYO”. And the kids came, and from that one-time event our anti-gang was formed. It has developed into so many initiatives like Keep Our Youth Safe 24/7, PolitiX, Wpg Water Wednesdays, and Meet Me at the Bell Tower.

I call AYO a stereotype breaking, opportunity creating, volunteer machine. And I told the kids, “I can’t pay you, but I’m not getting paid either.” I’m trying to change the attitude of ‘what can I get out of this?’ to ‘what can I give to this?’ From valuing stuff to valuing others.

KK: And do you see that change happening?

MC: Yes. I see it at least once a week, on Selkirk Ave. at Meet Me at the Bell Tower. And if it can happen here for two years straight it can happen anywhere. We were told we couldn’t stop violence by meeting on a street corner once a week with children, and listening to what they had to say. Well crime rate around the bell tower dropped 18% compared to 3% citywide. Our community owns that now. People feel like they’re really doing something positive.

So the more we share that attitude  – of valuing people – the more we can have a societal shift.

KK: And you’re also sharing it through public speaking and writing.

MC: Yes. At this point I speak, probably, once a week [to groups, schools, at conferences etc]. And write a blog. When I write I’m trying to convince the skeptics, the haters. I deliberately craft my message for someone who thinks I’m full of crap.

One of my other goals is to reveal the things that I’ve been able to do, to other young people. So they can see what’s possible. I want them to see multiple solutions, to not think that a particular way is the only way, to have divergent thought patterns. Mostly because, my main, personal objective is to stop suicide. The suicide rate in our communities is completely insane. So that’s the lens I’m coming from, to stop suicide and build resilience. It’s our job in society to share our gifts, fulfill our roles and save lives.

KK: Do you think education is the answer, to accomplish this?

MC: It is, but not education in the way that it is transcribed by western society. Right now our society thinks education is something that happens over there, behind four walls. But that’s not the only place where education is valid. The education and knowledge that comes from ceremony, learning about spirituality, nature, what water gives us, on street corners, in restaurants doing interviews, that is all valid knowledge. My biggest frustration is people who have such a rigid perspective on education. Or say it’s the only way out, but don’t see that it’s everywhere, that opportunities for learning and building resilience are everywhere.

Here’s another thing about education that I think is important. The question of how do you know if [students] are learning. Things like measurement indicators for outcomes are important. But one of the things I want to do is shift the measurements from measuring bad things to good things. Shift conversations from talking about issues, to talking about solutions. Solutions to give hope. Talk about desirable outcomes instead of obsessing over the undesirable outcomes. I don’t see any stats about how many times the north end has gotten together to build community. You don’t hear about that unless you live here. But you sure hear about the crime rate.

KK: Switching gears a bit, you gave a TEDx Talk awhile back and in that talk you said everyone has a gift. How do you help kids find their gift? Especially those who say they don’t have one.

MC: Well, first I give them a hug, then I’ll do an activity with them. I tell them they have to answer two questions: the first is list 3 or 4 things you like doing…so do it! (laughing)

KK: Um…Reading, hanging out with my sister, and singing.

MC: And then I ask: Which one are you really, really good at. Reading?

MC: Hanging out with your sister?

KK: Yes, although I don’t do it as much as I should.

KK: I suppose so, other people tell me I’m good at it.

MC: Well, there you go, we have some good leads there about what your gift is.

Another strategy is thinking about how you played when you were a kid. What were your favourite games to play and what was your role. I was always organizing friends together to play. I’d get people together and then say, ‘okay, go play!’ Did you just sit by yourself and colour? Maybe you’re an artist. What was it that engaged you so much about watching TV or playing outside?

With these two strategies you’ll always get something in the end. And then you get to say to the kid, ‘See? You do have a gift.’

Part two of the interview with Michael will be one of our next blog posts! Stay tuned.